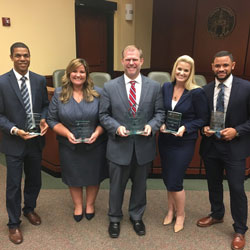 In most tournaments, you’ll be hard pressed to find teams that’ve been knocked out cheering for those that haven’t.

That is, unless you were at the 2018 Stetson Pretrial Championships in Gulfport, Florida, earlier this month.

“I am moved by the reports I received as to how well they represented the very essence of Regent University School of Law,” said LAW interim dean, Judge Patricia West (Ret.). “Each team they defeated was in their corner for the next round as they progressed through the competition, speaking volumes about their character.”

“The fact that the students were the national champions, as well as winning best brief for the government position, demonstrates how Regent University prepares law students as legal writers and as legal advocates, whether for appellate court or trial court,” said coach, Andrew Page ’10 (LAW).

Judges examined a variety of elements, ranging from students’ written briefs to their oral arguments and cross examination of witnesses in the moot court tournament.

Mitchell and Sylvester both received Best Advocate awards for their performance in the preliminary rounds.

“We enjoyed the benefit of having the input of numerous classmates and attorneys who attended our practices and provided suggestions on how we could improve,” said Sylvester.

The quality work and strong effort the team put forth was not lost on their competitors.

“Literally every team that we competed against expressed to us their desire that we would win it all,” Page said. “The humility and sportsmanship demonstrated by the Regent students left a mark of friendship and civility with the teams they competed against, no doubt demonstrating the character they received from their relationships with Jesus.”