Sometimes it is more important to hear someone’s heart than to just know their thoughts. Thus, we can send a tweet that is a little tongue-in-cheek and we need an emoticon added in to show a wink.

When students defend their thesis, we don’t just ask them to pass the written part, but they must defend it in person or at least via videoconference or conference call. That way, their faculty committee can hear the confidence and convincing tone in the person’s voice, assuring the faculty that the student really does know the meaning behind the thesis.

Young people today often want to hear more than they read. In fact, depending on the subject and circumstance, maybe many middle and older adults also appreciate those additional tone of voice or visual cues associated with non-text-based media.

Because of that, this is the last time this newsletter will be static. We will begin to implement hypertext links to blog videos or podcasts from our faculty and students as ways to introduce the passion and heart into what we share. We look forward to sharing with you next month in this new fashion. 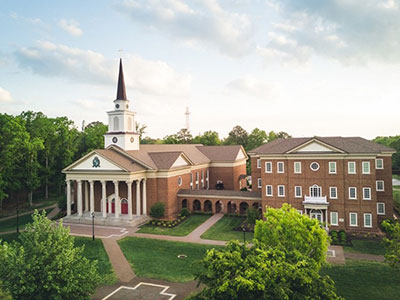 The Shaws expressed great faith in the work and spirit of Regent. “How do you explain Regent University?” Jack reflected. “One word —God! God is here! God will be here. Regent is a hallowed place.” Referring to the Regent community as “called and chosen,” he added, “May the Shekinah never leave this place. A place of vision — a place of legacies.”

Originally dedicated on March 22, 2013, The Shaw Chapel is designed after London’s famous St. Martin-in the-Fields and reflects the beautiful Georgian architecture of the Regent campus. The 1,000-seat sanctuary is in a cruciform shape, symbolizing the cross. Its copper-clad steeple is 125-feet, 6-inches from the ground to the top, and it weighs 15,000 pounds. The steeple cross is covered in 24-karat gold leaf and is 9-feet high. The stained-glass chancel window features the classic artist rendering of The Ascension, which depicts the ascension of Jesus into heaven.

The chapel was created to establish a clear campus symbol of the Christian faith as it serves as host for important ceremonies – from weekly chapel, prayer, and worship services, to weddings and alumni events. The Shaw Chapel will continue its tradition as an important marker on campus that will be enjoyed by thousands of Regent University students, faculty, staff, and friends, as well as CBN and the local community.

Jack E. Shaw is chairman and CEO of Shaw Resources, a real estate and property-management corporation in Greenville, South Carolina. He is a successful businessman, investor and philanthropist with a passion for educational institutions and student scholarship. Mr. Shaw is also the author of the popular and powerful book, “Little by Little: A Journey to Success and Significance for Life.” His heart for growing spiritual life in every sphere of influence is seen in his dedicated service on boards of several universities, international ministries and nonprofit organizations. Jane L. Shaw shares her husband’s interests and passions for saving and investing money to build the kingdom of God. She works alongside her husband at Shaw Resources and prides herself on being “mostly a cheerleader” to her family. Together, Jack and Jane have three grown children and seven grandchildren. In 2016, the Shaws started an endowed scholarship at Regent to honor Jack’s parents W.E. Erby and Mittie Shaw. 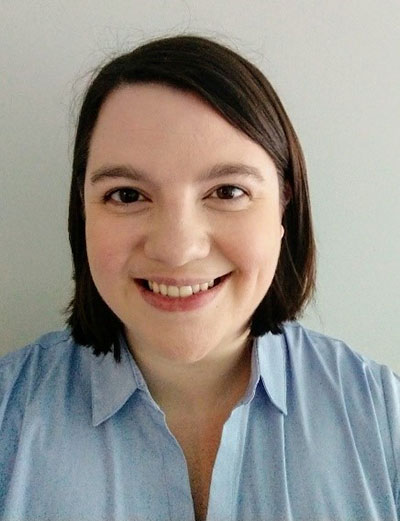 Abigail Hall, a spring 2014 graduate, works with the Secure Community Network, as the Senior Intelligence Analyst. Hall works with federal and security initiatives. She is “responsible for managing and directing the day-to-day operations of the intelligence operations center.”

The agency’s mission is “to guarantee the safety and security of the Jewish community in North America.” Their purpose is to “foster a culture of empowerment, collaboration, and vigilance.” The organization has 147 regional federations where security directors collaboratively work, including with non-affiliated synagogues, on a federation level. In fact, any Jewish center can reach out to them.

As preparation for this current position, upon graduation from Regent, Hall secured a position as the Crime Analyst with the Las Vegas Metropolitan Police Department within the Southern Nevada Counter-Terrorism Center. Hall was responsible for researching, tracking, analyzing, and reporting on stolen and recovered firearms data. In addition, the position required her to analyze and report on a variety of topics including terrorism, critical infrastructure, gang activity, and criminal trends.

Hall had chosen Regent for her studies because she was very familiar with Regent and the neighboring Christian Broadcasting Network where her father worked for over 30 years. She contemplated pursuing her law degree but believed a Master’s degree from the School of Government was a better fit. She enjoyed the ability to complete the program online, with the quality of professors. It was one of these professors who connected Hall to someone who pointed her toward her current career path.

She advises, “Get opportunities not pictured in your mind; you may think the risk is too expensive; embrace opportunities given.” She is thankful for the opportunity to have received an education with a Christian perspective. 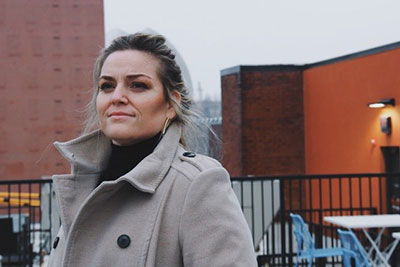 Rachel Faagutu, a current National Security and Mid-East Politics student, has traveled the globe speaking publicly. She currently serves as a full-time Missionary with the International House of Prayer in Kansas City. Faagutu is a member of the leadership team who pastors twenty-five worship teams in the ministry.

In addition to serving at this ministry affectionately known as I-Hop, Faagutu has gone on international mission trips to Russia, Ukraine, Taiwan and Mozambique. While overseas, Faagutu “encouraged missionaries in the field; trained their leadership teams in discipleship, worship and prayer, and taught pastors and leaders at conferences and training schools that activate prayer.” In addition to traveling internationally, Faagutu serves domestically, as a conference speaker and worship leader.

In addition to her ministerial work, Faagutu is the Founder of Happy Heart Records LLC, started in January 2012. In that role she co-wrote, recorded and published two children’s worship albums.

Faagutu was drawn to Regent when she heard about Regent University’s reputation of producing leaders like Jay Sekulow, President Donald Trump’s personal attorney, and former Congresswoman Michele Bachmann who are changing the world. She anticipates graduating in December 2020. 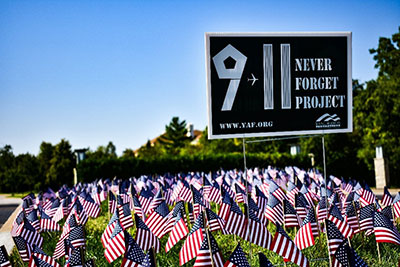 Regent University’s Young Americans for Freedom student group joined students from more than 220 high schools and universities across America to take part in the largest, nationwide initiative to remember those murdered by 19 radical Islamists on September 11, 2001, as part of Young America’s Foundation’s 9/11: Never Forget Project. Nationwide, more than 650,000 American flags were placed in campus fields and pathways to remember the 2,977 lives lost on 9/11.

Young America’s Foundation created the 9/11: Never Forget Project in 2003 to help students create meaningful memorials to the innocent victims of this attack and to inspire commitment to defend our freedoms wherever they are attacked. More than 11 million American flags have been placed in displays across the nation since its creation.

We will never forget! 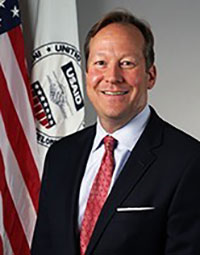 Richard Parker, an alumnus of the Robertson School of Government, was sworn in as the Assistant Administrator for USAID’s Bureau for Legislative and Public Affairs on June 10, 2019, after being confirmed by the U.S. Senate.

Mr. Parker previously served as the Director of Communications at the U.S. Global Leadership Coalition (USGLC) working with top NGOs and Fortune 500 Companies to educate Americans about the importance of global development. He joined the USGLC after serving as Director of Communications for the Peace Corps, where he oversaw the creative, digital, marketing, press, and video production offices within the agency.

Prior to his time at the Peace Corps, Mr. Parker served at the U.S. Department of Health and Human Services (HHS) as the President’s Emergency Plan for AIDS Relief and the President’s Malaria Initiative were created, and he also served in communications, marketing, and policy roles for the office of the Secretary of Health and Human Resources for the Commonwealth of Virginia, the American Red Cross, and Levi Strauss & Co.

USAID, headquartered, in Washington, D.C., is an independent agency of the United States federal government that is primarily responsible for administering civilian foreign aid and development assistance. 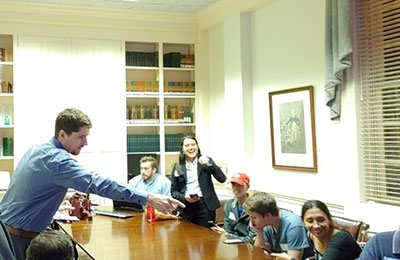 Regent faculty and students recently participated in American Majority’s Campaign-in-a-Day, an interactive, rigorous, team building training experience as well as a great event to build and hone leadership skills. Attendees were placed on campaign teams and given a candidate, each with their own strengths and weaknesses. Teams were tasked with figuring out a plan to bring them to victory on election day. Throughout the course of the event attendees were briefed on the dos and don’ts of campaigns and immediately put what they learned into action through allocating funds, messaging, and getting out the vote. Participants were stretched competitively, creatively, and politically; and worked together toward victory!

On August 28, 2019, Dr. Eric Patterson, Regent University Scholar-at-Large and Religious Freedom Institute (RFI) Executive Vice President, delivered remarks before the Permanent Council of the Organization of American States (OAS). On the agenda for this session was the International Day Commemorating the Victims of Acts of Violence Based on Religion or Belief, which the UN observed on August 22, 2019. In his remarks, Patterson spoke with clarity and conviction about the crisis of religious persecution around the world.

“Sadly,” Patterson stated, “we live in a world that has become less, rather than more, free in recent years: more restrictions on liberties such as religion, assembly, speech, and the press; and, more persecution in some regions based on religious identity, religious conviction, and religious practice.”

Patterson pointed to two main types of religious persecution, one “perpetrated by those in power claiming a religious justification for harming others,” and the other involving the “targeting of individuals or communities for persecution because of their religion.” In recent years, examples of both types of persecution could be found in China, Sri Lanka, and countries where ISIS has had a foothold.

In light of the long history and current crisis of religious persecution around the world, Patterson urged:

[W]e must not become complacent. We must instead resolve to look closely at patterns that lead to repression, persecution, and violence in order to call out, and take resolute action against, systematic violations of human rights.

Turning his attention to the Western Hemisphere, Patterson made remarks that were geographically expansive. He described an increasingly “militant secularism” in Canada and the United States that “seeks to push religious people, religious institutions, and religious ideas entirely out of the public square.” In Latin America, on the other hand, Patterson outlined alarming circumstances in Cuba, Mexico, and Venezuela which involved government use of fines, detention, and other forms of harassment against certain religious individuals and institutions. He also highlighted violence and other maltreatment against certain faith communities by non-state actors in those countries.

Beyond identifying and condemning great acts of religious persecution, Patterson pointed to a crucial component of the solution: “[R]eligious freedom is critical to peace and security in our hemisphere.” Concluding with words about the value and meaning of religious freedom, Patterson recalled its proper scope:

Religious freedom encompasses the rights of individuals and communities to practice their beliefs in private and to exercise their religious convictions in public, including in civil society, economic enterprise, politics, and law.